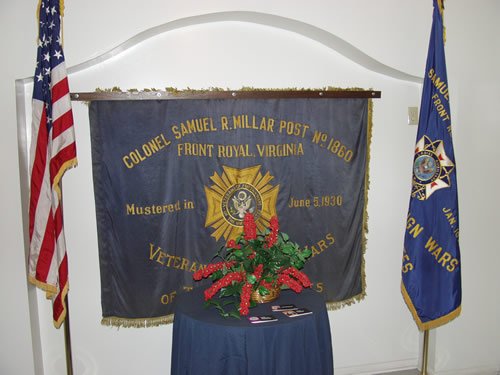 There is a common bond that exists between the men and women who have shared the military experience in battle: A shared sense of duty and a common belief in a cause higher than self. Our nations’ veterans chose to serve and by doing so, assumed all the risks associated with maintaining freedom. VFW members are here because they understand the true essence of America and its ideals and beliefs and the price they paid to be eligible to join the ranks of the VFW.

The Front Royal Post was named Col. Samuel R. Millar Post No. 1860, in honor of this distinguished veteran and civic leader. The Harrison News Record paid this tribute on that date,

“No greater thing can be established as a memorial to anyone than this organization of men who have served the Stars and stripes in foreign fields, and no greater character could have been found to be the guiding star of an organization than that of Colonel Samuel R. Millar.”

There are no upcoming events.

NOTE: We still receive mail at the Post address even though the building is no longer there.